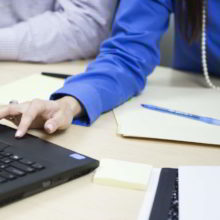 America’s legal system is not good for society. It makes enemies out of friends and it exacerbates strife, hostility and ill-will.

Win or lose. Those are the two options offered to us in America’s adversarial system of justice. It is estimated that about 60,000 disputes are filed every week nationally, but few, very few, ever get resolved through the courts the way the original parties had dreamed or hoped they would be.

Relationship disputes — the largest category of cases that are causing gridlock in our courts — are especially ill-served by our binary (win/lose) system of justice.

All of us, at some point or another in our lives, experience disputes in our personal or professional relationships. They arise between a husband and wife, a merchant and customer, a landlord and tenant, an employer and employee, a professional service-provider and her client, and in the course of many other workplace and community relationships.

We all know from experience how important it is to keep talking, discussing, negotiating and compromising in order to settle an issue that is festering between people in a relationship. Yet so often, by the time an issue becomes openly contentious, each person has already placed an “emotional charge” on their position, thereby stifling open communication and compromise. At some point, one of the parties, at least, eventually seeks out a lawyer.

Here’s the thing: a lawyer’s training is to resolve disputes using America’s adversarial system of justice. His or her job is to “win” the dispute. To carry out that role, the lawyer will usually instruct that direct communication with the other party in the relationship cease. All further communications are directed through the lawyer to the other side, then to the other side’s lawyer. The long and difficult trek on the road to reaching their day in court would have begun.

We don’t have to make “enemies” of each other

It is worth remembering that one of the first meanings offered by the dictionary for “adversary” (as in our “Adversary System of Justice”) is “enemy.” So, parties who were in an often close and long relationship are now forced by the justice system to resolve probably the most important difference in the relationship by acting as enemies. They have to do this in order to prove the other party wrong. Therein lies what is wrong about our justice system. On a very basic, human level, the justice system works against sustaining and repairing a relationship so that it can go on.

Moreover, the winner in a lawsuit need only be 51 percent “more right” than the loser. So, in real terms of determining right and wrong, the difference, quantitatively, need only be two percent! Does that make anyone feel any better?

In practical terms, the parties to relationship disputes tire, die or go bankrupt before the judge or jury decides who is more right than the other person. It should be sobering to realize that 97 percent of all relationship disputes do not make it all the way through the system to arrive at a clear determination of a winner or loser. This alone should make us ready to try something else — to reach for a better way.

The good news is that for relationship-based disputes, there is indeed a better way than the adversarial system of justice. It’s mediation.

In mediation, the disputing parties select a third party who sits down with them and helps them work out a mutually satisfactory agreement that resolves their differences. Mediation, in its essence, is as simple as the previous sentences but in its operation it can be as subtle, intricate and as infinitely varied as humanity itself.

While litigation and arbitration cede the power to determine the outcome to a third party, mediation is an informal, voluntary, loosely structured process in which the mediator facilitates communications, encourages the exchange of information and ideas, advises, suggests, and translates everything that is said. The result? It detoxifies the emotional climate. It leads to practical recommendations. It opens pathways to persuasion. Mediation does all this in the service of assisting the parties to reach their own agreement.

Mediation is by no means a magic pill—but it surely offers more relief for what ails us in our relationships than yet another lawsuit. It certainly deserves far more attention than we, as a society, have given it thus far.

Primer on Forming Your Own Business

A Guide to Basic Estate Planning

Before You Sue, Consider Mediation